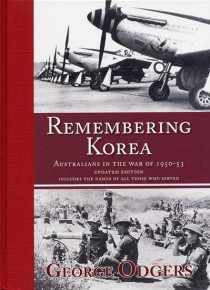 This war book is fighting record of the Australian Army, Navy and Air force in the Korean War of 1950-53 was exemplary and deserves to be remembered as a great achievement. The late George Odgers text is a very readable account of the events of the war. It tells the story and seeks to honour the memory of those Australians who lost their lives, and pays tribute to the achievements and sacrifices of all those who served.

Illustrated with more than 70 photographs,
it includes a complete and updated Roll of Honour, nominal
roll listing everyone of the more than 18,000 Australians who served in Korea