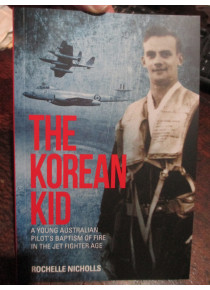 In 1950, with the shadow of World War II still heavy across the world, a vicious civil conflict erupted on the Korean peninsula and engulfed 24 nations, including Australia, into a new war. The world’s two atomic superpowers – the United States and the Soviet Union – menaced each other across an arbitrary border as Korea became the military proving ground for a new Cold War.

Within a week of the North Korean invasion of the South on June 25, 1950, 77 Squadron RAAF were in the air.

The first United Nations air unit committed to the defence of the overrun South. Of the 340 Australians who perished in Korea, 41 were from 77 Squadron Royal Australian Air Force.

﻿The odds faced by young RAAF pilots were one in three, that they would not return to Australia. Many lacked combat experience and their planes were obsolete. Their orders were to dive upon a well-armed enemy positions with their bellies exposed, where one bullet to a fuel-tank meant an inescapable fireball.

The Korean Kid is the story of Jim Kichenside and the Australian pilots who took to the skies in the ‘forgotten war’.