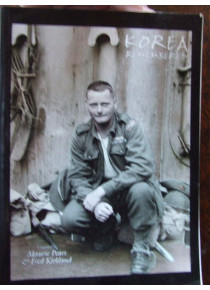 Australian Reminiscences of the Korean War 1950-53

Korea Remembered: The RAN, ARA and RAAF in the Korean War of 1950 - 1953' Compiled By Maurie Pears and Fred Kirkland.

Recollections and memories of Australian Veterans of the Korean war, 47 contributions including about being a prisoner of war, and a couple by medical staff, about 40 B&W photos. Some 17,000 Australian military personnel (Army 19,500, RAN & RAAF 6,500) served in the Korean War.

Excellent book for medal research . All major Battles covered including Air war 77 Squadron Meteors vs Migs Kapyong Han River Pusan etc. HAMS Sydney the aircraft carrier. Caught an eye on a great before and after pic of Black Murray 77 sqn greatest number combat sorties flown of all United Nations pilots - 333. Pics are excellent looks as though they may have come from contributors rather than AWM.