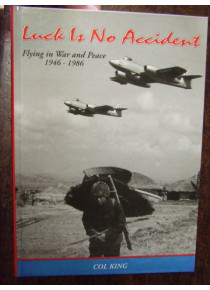 The author learned to fly as a teenager, then joined the RAAF where he served with 77 Squadron flying Meteor jets against North Korean enemy forces. After the war he flew Mosquitos with a RAAF survey Unit and later P2V5 Neptunes.

After his RAAF service, he flew with Qantas in the days of the Constellations, then Malayan Airlines and East-West. His life has been full of close shaves with death and opportunities that came his way by sheer chance: hence the title, Luck Is No Accident.
About 60% of the book is devoted to RAAF service.