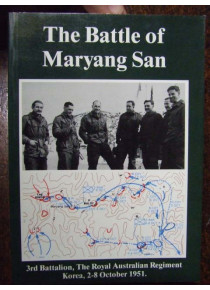 History of the 3rd Battalion RAR and its famous battle during the Korean War in October 1951 at Maryang San.

In early October 1951, 3RAR (3rd Battalion, Royal Australian Regiment), in conjunction with British Commonwealth troops, attacked a group of hills near the Imjin River. The attack was named after the biggest of these hills and became known as the battle for Maryang San or “Operation Commando”. The operation began on 3 October with a British assault on one of the other dominant features, Hill 355 (known as Kowang San or "Little Gibraltar"). Then, on the morning of the 5th October, 3RAR attacked Hill 317 (Maryang San).

The Australian force approached Hill 317 through rugged countryside at 4 am, under a heavy cloak of mist. At 10 am, the mist began to lift, exposing the Australian advance. However, the communists briefly hesitated before firing, which allowed 3RAR to capture the first line of defences in a fierce burst of fighting. The following morning 3RAR drove the communist forces from their position atop the hill, but they had to resist enemy counter-attack. The crest of the Hill 317 was secured on 6 October, after which the Australians assisted the British to take a lesser feature, Hill 217. This was finally achieved on the morning of 8 October. There had been two previous attempts to take Maryang San by American troops, both of which had been unsuccessful. However, over a fiercely fought battle, against superior enemy numbers, UN troops were able to gain and secure the hills 317 (Maryang San) and 355 (known as Little Gibralter).

One of Australia's great Military victories.