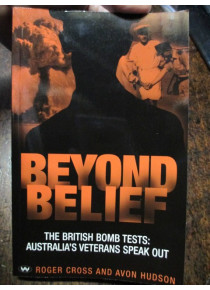 Beyond Belief: The British Bomb Tests: Australia's Veterans Speak Out﻿
by R Cross A Hudson

One of the author's, Avon Hudson was a veteran of the atomic bomb tests at Maralinga in South Australia. The book is full of personal stories from RAAF Navy and Army servicemen who took part in the nuclear tests. I guest the title of the book says it all it is Beyond Belief that the British conducted Atomic Bomb tests in Australia during the 1950's - different times no doubt. The book covers by personal reflections and official history the atomic bomb blasts in Australia. The nuclear tests began in 1952 at Monte Bello Western Australia﻿, 1953 at Emu Field South Australia and the Maralinga tests occurred between 1956 and 1963 at the Maralinga site, part of the Woomera Prohibited Area﻿. A total of 7 nuclear tests were untaken. All these tests are covered in this book.

This book provides a voice for the forgotten victims of the British atomic bomb tests conducted in Australia during the 1950s. Uncovering scenarios in which government scientists employed to monitor the tests were given protective clothing, while military personnel and workers were left unprotected and exposed to a simulated theatre of atomic war.