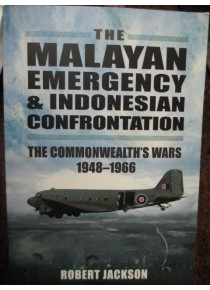 The struggle with Communist terrorists in Malaya known as The Emergency became a textbook example of how to fight a guerrilla war, based on political as much as military means. This book deals with both the campaign fought by British, Commonwealth and other security forces in Malaya against Communist insurgents, between 1948 and 1960, and also the security action in North Borneo during the period of Confrontation with Indonesia from 1962 to 1966.

Both campaigns provided invaluable experience in the development of anti-guerrilla tactics, and are relevant to the conduct of similar actions which have been fought against insurgent elements since then. The book written with the full co-operation of various departments of the UK Ministry of Defence contains material that until recently remained classified.

This is the first full study to cover the role of airpower in these conflicts. It will be of relevance to students at military colleges, and those studying military history, as well as having a more general appeal, particularly to those servicemen and women who were involved in both campaigns.﻿