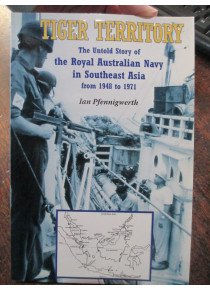 Tiger Territory The Untold Story of The Royal Australian Navy in Southeast Asia, 1948 to 1971 by I Pfennigwerth

Between 1948, when Australia assumed strategic responsibility for British Commonwealth sea lines of communication to and from Southeast Asia and 1971, when the Five Power Defence Arrangements came into effect, ships and men of the Royal Australian Navy served with almost unnoticed distinction in defending the newly emerging nations of Malaya, Malaysia and Singapore.

Along with British and New Zealand forces, they fought against insurrection and infiltration during the Malayan Emergency between 1955 and 1960 and countered Indonesian incursions and infiltrations into Malaysia and Singapore during Confrontation (1964-66).

In the process, RAN personnel held key positions in the Royal Malaysian Navy during its most challenging period of development and growth. While the Vietnam War loomed ever larger over the region, the RAN played its part in creating the conditions for the peace and prosperity Malaysia and Singapore w enjoy, by bombarding terrorist positions, engaging Indonesian infiltrators in vicious firefights, providing support to land forces, or patiently laying the foundations for the regional navies to build upon.﻿