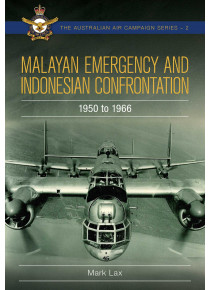 This book forms No 2 in the Australian Air Campaign Series - Click to see other books in the series
The Malayan Emergency began when communist pro-independence fighters waged a guerrilla war against the Federation of Malaya and Commonwealth Forces. The conflict escalated when Indonesia become involved due to its opposition to the independence of Malaya and Singapore. Australia provided support from all three services.

These Conflicts led to the birth of Malaysia and the establishment of an ongoing RAAF presence in South East Asia. Until recent operations in Afghanistan, the Malaya Emergency and Confrontation was Australia's longest conflict. This book Malayan Emergency and Indonesian Confrontation, recounts the story of the politics, strategies and operations that brought these two conflicts to a close. The vast majority of the book focuses on the operation of the RAAF during the conflict.


The cover shows the Lincolns from RAAF Amberley (based Singapore) flying over Malayan shores. The book provides a substantial history of RAAF Butterworth airbase its use during the period and the aircraft that operated from the base. Aircraft profiled include C 47 Dakota GAF Lincoln Mk30 (Tengah Singapore)  Canberra B20 RAAF 2 Sqn,  CAC Sabre CA 27 Mk32, UH - 1B Iroquis and C130 Hercules

The book's appendix concludes with a Roll of Honour, RAAF Honours and Awards pertaining to the Conflict, Aircraft Squadron location of operation and dates.