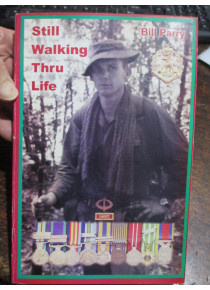 Also includes a sequel book by Parry, "Life in the Philippines". This is a more scarce book of Parry's books many would know of his other titles, Battle Heroes & Humor In The RAR and We Were There In The R.A.R. Duty First Royal Australian Regiment.  His books provide a soldier's 'no bars' true refection of his Army life. Loaded with veteran experiences of the Battles, Life, Army Doctrine and of course sex.