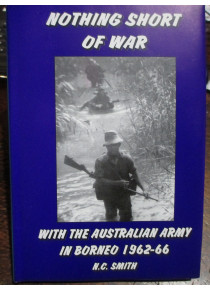 This military book includes a 92-page history of Australian involvement in the Indonesian – Malaysian Confrontation (Konfrontasi). The detailed text is supported by named member group and action field photographs. There are numerous appendixes of named soldier lists including but not limited to:
Those who qualified for the General Service Medal – Brunei Clasp
Allotment of Units for Special duty
Nominal Roll Of Casualties Indonesian Confrontation
Nominal Roll – Australian Army Personnel

The Indonesian–Malaysian Confrontation (Konfrontasi) occurred during the period 1962–66.
The conflict was part of Indonesia's opposition to the creation of Malaysia, initially on political grounds, which escalated into armed opposition. Most of the action took place in the border area between Indonesia and East Malaysia on the island of Borneo . Due to its obligations, Australia was forced to commit Army engineers and combat troops. The units included men of the Artillery, SAS, 3rd Battalion RAR  and 4th Battalion RAR. The Australian Navy was also involved in the confrontation.
The  Indonesian–Malaysian Confrontation (Konfrontasi) was an undeclared war.