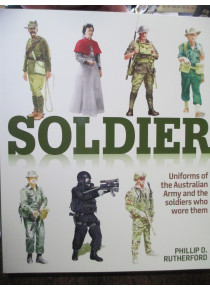 Soldier Uniforms of the Australian Army All Time

Soldier Uniforms of the Australian Army and the Soldiers who wore them.
by Dr Phil Rutherford

This book is much more than a description of military uniforms and equipment. Phil Rutherford has spent over 20 years searching for the roots of Australia’s modern army, analysing trends both in dress and in the military art itself.

In doing so he has discovered interesting details about the uniforms worn and the equipment used by today’s soldiers that can truly be called its own. Even the most iconic symbol of the Australian army, the slouch hat, was not invented by a Victorian volunteer as popular rumour suggests, but was worn by troops in seventeenth-century Europe.

In fact, there are significant elements of the army’s dress and equipment, such as the badges of rank worn by both soldiers and officers, which can be traced to the days of knights in shining armour.