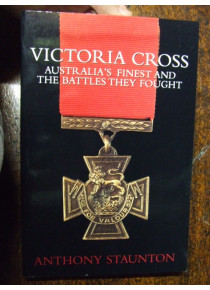 Victoria Cross Australia's Finest and the Battles They Fought' by A Staunton.﻿ : new book

Victoria Cross Australia's Finest and the Battles They Fought ' by A Staunton. The Victoria Cross medal is the highest military award for bravery for any serviceman in the Commonwealth and, since its institution in 1856, has been awarded to just 1,353 individuals. The VC is not restricted to officers, and the sole condition for its award is that it can only be won "in the presence of the enemy ... [for] some signal act of valour or devotion to their country".

Since the first VC medal was awarded to an Australian in 1900, just 95 Australians have won the award, and this book tells their stories (the 2 recipents of the Victoria Cross for Australia Medal ,﻿ Roberts-Smith﻿ and Donaldson are not included as the book was printed in 2005).

This is a book to be read and treasured. It recounts stories of extraordinary heroism in which, occasionally, a soldier performs duties which are quite out of the ordinary. For example, Richard Kelleher was an Irish immigrant who worked as a labourer in Brisbane before enlisting in the Australian Infantry Force in 1941. He spent a year in the Middle East on sentry duty until his unit returned to defend Australia in 1942. His unit was sent to Papua in early 1942, where it fought the Japanese on the bloody Kokoda trail. During one operation, under heavy fire, Kelleher's platoon commander sent him back with a battle report to HQ, but after his unit returned on leave to Australia, he was court-marshalled for cowardice in leaving his post in the face of enemy fire. As his platoon commander had been killed, he could not corroborate Kelleher's story, so he was sentenced to 12 months imprisonment. His conviction was later quashed, and Private Kelleher returned to Papua, where he won the VC during bitter fighting outside the town of Lae, on the north-east side of Papua New Guinea, single-handedly attacking an entrenched enemy post, saving his own platoon and rescuing his wounded section leader.

This book will inspire and enthral all who read it. It is interesting to note that, the Australian War Memorial displays 61 Victoria Crosses (59 Australian and 2 British), the largest publicly held collection in the world. Sixty Victoria Crosses are displayed together in the Memorial's Hall of Valour and one in the Conflicts 1945 Today gallery. These VCs have been donated or loaned to the Memorial by individuals, families, or unit associations to be displayed for the nation..