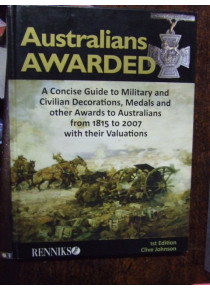 Sorry but the 1st edition is no longer available, but to see the 2nd edition click here.

This military book Australians Awarded, edited by the Brisbane-based war medal dealer Clive Johnson, is regarded as the complete reference and standard guide to all Australian Military and Civilian Decorations and Awards issued between 1815 and 2007. It includes over 400 pages of detailed information in full colour printed on gloss paper. Not only is this the first and last book any collector of Australian war medals requires, it's superbly presented.
Australians Awarded is a concise and comprehensive guide to Military and Civil Decorations, Medals and other Awards from 1815 to 2007. The book contains comprehensive listings of the types of awards and winners details for: British Military Medals - pre 1901; Australian Armed Service Military Medals - post 1901 Army Navy and Air Force; Colonial Civilian Decorations - pre 1901; Australian and State Government Civilian Medals - post 1901; Popular Awards of special interest from Institutions; Foreign Medals awarded to Australians; All military medals and other awards of commercial value are at current market (2008 estimated) rates. ﻿