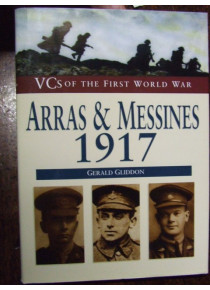 First published 1998 and this is that edition. This book lists all the VC awarded in these 1917 Battles including Australians , Canadian and New Zealanders who have earned the highest military honour for bravery the Victoria Cross . It is important for the medal researcher in that it lists the citation in full then gives a written account of the battle surrounding the Victoria Cross action - This information helps immensely when researching medals of individuals of the same Battalion and battle - the information is very detailed for example Company letter is given, times etc . If you are collecting medals you will be extremely pleased to obtain this ever increasing hard book to obtain. Battles covered Arras ( Aust.Bullecourt Hindenburg Line) Messines (Aust.) Vimy Ridge ( Canada ) Lagnicourt (Aust.) Bullecourt (Aust) St Yves (Aust) Bapaume (Aust) Hermies (Aust)++++