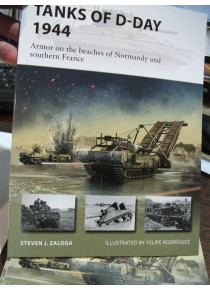 $35.00
Tanks of D-Day 1944 Armor on the beaches of Normandy and southern France - Osprey Books

The focus of this volume will be on the specialized tanks developed for the Operation Neptune amphibious landings including the Duplex Drive amphibious Sherman tanks used on both the US and British/Canadian beaches. It also covers the specialized engineer tanks called "Armoured Funnies" of the British 79th Armoured Division and addresses the popular myth that US Army refusal to employ the Armoured Funnies was a principal cause for the high casualties at Omaha Beach. There is also coverage of Operation Overlord's "Forgotten D-Day", the amphibious landings of Operation Dragoon.