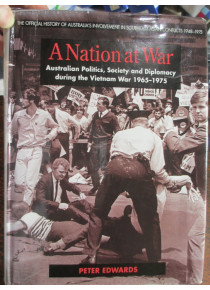 A Nation at War Australia and Politics, Society and Diplomacy during the Vietnam War 1965- 1975
by Peter Edwards﻿

The Australian Official History of its involvement in the southeast Asian conflicts between 1948 and 1975.

It shows how the initial support for the Vietnam commitment was eroded until a majority of the population come to think that it was a mistaken and if not immoral war.

The book traces the growth of the protest movement against the War and conscription.

This is the sixth volume of the Official History of Australia's Involvement in Southeast Asian Conflicts.﻿