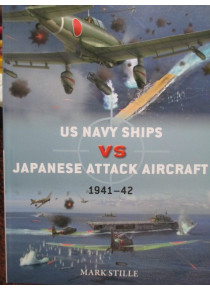 US Navy Ships vs Japanese Attack Aircraft: 1941-42 by M Stille

Excellent for further Midway research compares the defences of the ships like Enterprise to the attacking Japanese aircraft.

The striking power of the Imperial Japanese Navy's carrier-based attack aircraft was established at Pearl Harbor, and the IJN's carrier-based torpedo- and dive-bombers showed their prowess again at the Battle of Coral Sea when they sank the US Navy carrier USS Lexington and damaged the carrier USS Yorktown. Even at the disastrous Battle of Midway, the relatively small number of IJNAF attack- and torpedo-bombers that were launched against the US fleet proved that they remained a potent force by heavily damaging Yorktown again, which allowed an IJN submarine to sink the carrier. At Guadalcanal, IJNAF carrier-based aircraft sank the carrier USS Hornet and badly damaged USS Enterprise twice.

However, throughout 1942, US Navy ship defenses brought down an increasing number of attacking IJNAF aircraft. The final major battle of the year, the Battle of Santa Cruz, exacted crippling losses on the IJN, setting the stage for the eclipse of the IJNAF's highly trained and effective aviation attack forces.

Packed with illustrations and contemporary photographs, this engrossing volume details the design, tactics, and operational records of both the US Navy ships and the IJNAF aircraft which attacked them over the year following Pearl Harbor. ﻿