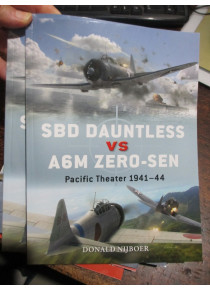 $33.00
SBD Dauntless vs A6M Zero-sen: 1942-44 Pacific by D Nijboer
The SBD Dauntless dive-bomber was a key cog in the US Navy's aerial arsenal throughout the Pacific War. Although a product of aviation design in the mid to late 1930s, the type soldiered on even as more advanced aircraft were appearing from American factories as the war progressed. Despite its classification as a dive-bomber and rather dated appearance, the SBD Dauntless could more than handle its own against the feared A6M Zero-sen a regular opponent, especially during the first 18 months of the campaign in the Pacific. The SBD was credited with 138 victories in aerial combat (principally in 1942), 107 of which were fighters and the rest bombers. Seven SBD units claimed five or more aerial victories.