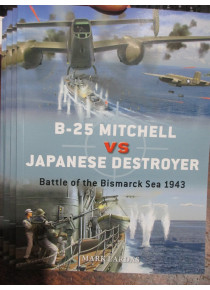 Battle of the Bismarck Sea 1943 B25 Mitchell vs Japanese Destroyer

The Battle of the Bismarck Sea was one of the most decisive naval battles of World War II and this highly illustrated study details the three-day fight which shaped the outcome of the war. From the popular Duel Series published by Osprey Books. Whilst the book concentrates on the combat between the Mitchell Bombers and the Japanese Destroyers.

During the main battle on March 3rd 1943 the B25 Mitchell, Beaufighter (RAAF 30 Sqn) and Beauforts (100 Sqn) all took a toll on the Japanese Fleet