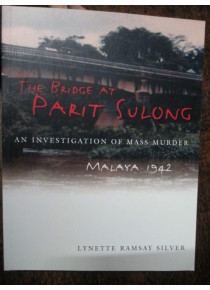 The Bridge at Parit Sulong - An Investigation of Mass Murder Malaya 1942 : by Lynette Ramsay Silver

Parit Sulong a small town in Johor, Malaysia. Muar to the west, was the site of an offensive Australian battle against the advancing Japanese forces in 1942. After four days of none stop combat the retreating Australians and Indians reached the Parit Sulong Bridge. The historical Parit Sulong Bridge was constructed before World War II in the 1930’s. The Australians found that the Japanese Forces had already overrun the bridge. The Australian Commander, Charles Anderson declared, “every man for himself” and 135 badly wounded men were left behind. Of cause, the Australians thought the men would be treated humanly. A terrible massacre of 161 Australian troops and Indians followed. It was not just a massacre but the men were subjected to torment and cruelty before being burnt alive. Few escaped, but a 2/29th Australian Lieutenant Ben Hackney survived the war to relate the details of the massacre.

This is the largest book ever written on the Battle, the amount of detail collected is quite extraordinary.

Importantly, the book has a full nominal roll of the 478 Australians who died during the Battle and after.

This is their story