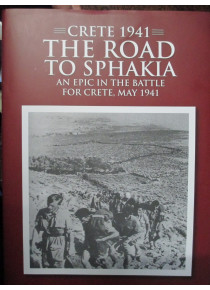 Crete 1941 The Road To Sphakia History Battle For Crete

This Book, 'Crete 1941 The Road to Sphakia' is a dedicated study of the courageous defence of the Island of Crete by Australian, New Zealand and Allied forces against the German Airborne invasion.
In particular, the gruelling withdrawal of Allied troops across the White Mountains to the tiny port village of Sphakia which is located on the south coast of Crete where it was possible to evacuate the survivors.

Following the defeat of Greece in April 1941, Britain and its Allies attempted to defend the Island of Crete against a German invasion. The resulting battle was one of the most epic and historical battles of WW2.
For the first time in history, a force of paratroopers captured a large island without the need of sea borne invasion.
Over a period of 11 days and nights in late May 1941 a fierce and desperate battle was fought between the two opposing forces. From the outset the Allied forces did not control the air. The German paratroopers were successful in taking control of the airfield that then allowed them to supply reinforcements.

Thousands of Allied troops attempted to retreat to the south along the road to Sphakia. This necessitated a 40 mile walk including the crossing of the rugged mountainous spine of Crete. It was an arduous journey along little more than a goat track.

Discipline was breaking down, soldiers became separated from their units and there was panic amongst many of the troops.

This is their story of endurance, courage and desperation.