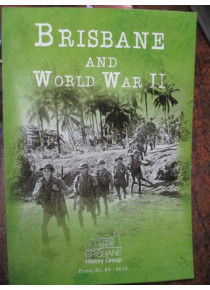 This is a collection of stories about historical Military aspects of Brisbane during World War II.
Of course in the early part of World War II, Brisbane was a front-line City, General MacArthur made it his base and the US fighting machine arrived.
The first section considers:
• the heightened activities on the Brisbane River during World War II By David Jones
• the operations of the Advanced Land Headquarters At St. Lucia Brisbane in and around the University of Queensland
• Moreton Bay antisubmarine harbor defences - the significance of indicator loop technology as a defensive strategy against submarines
• the US construction of an ordnance storage facility on Mount Coot-tha
• the upgrading and strategic importance of Fort Lytton During World War 2
• the military and civilian roles undertaken by women in Brisbane.

Section two examines:
• the exploits of the US submarines based in Brisbane
• the valiant and dogged defence of Tobruk by the 2/15th Battalion during the Easter Battle in 1941
• the trials, torments and triumphs of the men of the 61st Battalion who finally halted the advance of the Japanese army at the Battle of Milne Bay
• the achievements of Kenneth Fraser, who was responsible for effectively organising the treatment of casualties from the Middle East campaigns.

Finally, the third section relates:
• the story of the creation of a war memorial for the 2/9th Battalion and its two dramatis personae, a Czech sculptor and his subject, an Aussie digger
• the struggle to obtain heritage listing for Eagle Farm’s Hangar 7, a significant World War II facility. A short but impressive history of the Eagle Farm and Archerfield airfields. During the war Eagle Farm became one of the main US & RAAF Bases along with Archerfield and Amberley during World War II.
• the importance of researching the military archives of the US in order to gain a better understanding of Brisbane during World War II.