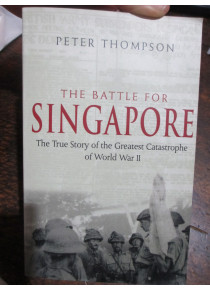 The Battle for Singapore by P Thompson

The Battle of Singapore one of the greatest military catastrophes of recent history. Considered one of the worst days in history for the British Empire when fortress Singapore fell to a numerically inferior Japanese Army.

The author has meticulously interviewed numerous survivors resulting in the book being packed with eyewitness accounts of the bravery, panic and self-sacrifice of the Australian British troops defending Singapore.