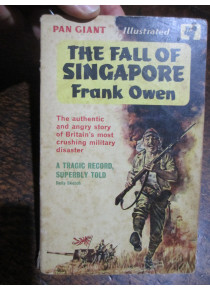 Regarded as one of the great histories written about the Fall of Singapore WW2. The battle resulted in the Japanese capture of Singapore and the largest surrender of British-led military personnel in history.

About 80,000 British, Indian and Australian troops became prisoners of war, joining 50,000 taken by the Japanese in the earlier Malayan Campaign.