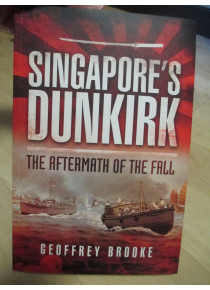 Singapore's Dunkirk Aftermath of the Fall

Singapore's Dunkirk The Aftermath of the Fall by G Brooke

British Prime Minister Winston Churchill called the Fall of Singapore to the Japanese "the worst disaster and largest capitulation in British history"﻿. The Singapore surrender of the fortress stunned him. He felt it was a disgrace and is said to have left a scar on his mind.﻿

In Singapore, panic was everywhere, many tens of thousands of men, women and children were left to their own escape or become a prisoner. To stay in Singapore certainly meant  captivity - at that time an uncertainty. This book tells of some of the remarkable and shocking experiences that lay in store for those who decided to escape by whatever means. A shocking and inspiring book that embraces great courage and endurance.﻿

The author, Geoffrey Brooke would know as he was there - Brooke served on the mighty Prince of Wales, survived the sinking and then made his daring escape from Singapore, via Sumatra and 37 days later reached Ceylon in a small malay boat.﻿