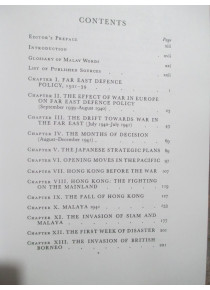 WAR AGAINST JAPAN VOLUME I THE LOSS OF SINGAPORE

WAR AGAINST JAPAN VOLUME I: THE LOSS OF SINGAPORE

We offer the British Official History for the Fall of Singapore as the Australians had crucial roles in the defence of Singapore. A large volume of 568 pages it's the largest record written about the military disaster.

Australian battles and operations are recorded.