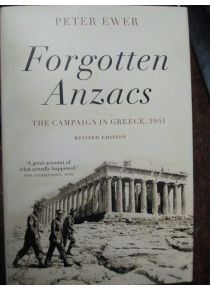 Every school child in Australia and New Zealand is brought up on the legend of the Anzacs. This, though, is the largely unknown story of another Anzac force which fought not at Gallipoli, but in Greece a generation later.

On 12 April 1941, General Thomas Blamey, commander of the Australian Imperial Force in the Mediterranean, issued an order of the day announcing the formation of a new Anzac Corps. Australian and New Zealand troops were at the time fighting side by side in Greece against an invading German army that had been triumphant everywhere. With the very existence of his force in the balance, Blamey invoked the spirit of Gallipoli to inspire his troops, suggesting that, ' The task ahead though difficult is not nearly so desperate as that which our fathers faced in April twenty-six years ago. We go to it together with stout hearts and certainty of success.'

Those hopes would be quickly dashed. Desperately outnumbered, and fighting in deeply inhospitable conditions, the Anzacs found themselves engaging in a long retreat through Greece, under constant air attack. Most of the Anzac Corps was evacuated by the end of April, but many men got only as far as Crete. Fighting a German paratroop invasion there in May, large numbers were taken captive and spent four long years as prisoners of the Nazis.

The campaign in Greece turned out to have uncanny parallels to the original Gallipoli operation: both were inspired by Winston Churchill, both were badly planned by British military leaders, and both ended in defeat and evacuation. British bungling at Gallipoli was one thing; but in Greece, Churchill authorised his commanders to leave the Anzacs to their fate if their rescue compromised wider British interests.

Just as Gallipoli provided military academies the world over with lessons in how not to conduct a complex feat of arms, Churchill's Greek adventure reinforced fundamental lessons in modern warfare - heavy tanks could not be stopped by men armed with rifles, and Stuka dive-bombers would not be deflected by promises of air support from London that were never honoured.

Until now, there has been no history on the campaign in Greece and Crete written from a truly Anzac perspective. Based on rarely accessed archives and more than 30 interviews with Australian, Greek, and New Zealand veterans, this superb book gives overdue recognition to the brave, forgotten Anzacs of 1941.