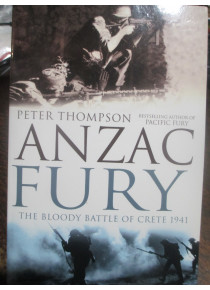 Anzac Fury is the concise Battle history of the Anzac forces that fought against the German armies in Crete . Anzac Fury also details an overview of the Battles which Australians took part in prior to the Bloody Battle of Crete such as Tobruk, Libya and Greece. During March 1941, British PM Winston Churchill sent the Australian and New Zealand troops from the victorious battlefields of Libya on an impossible mission to stop German forces advancing into Greece.
The Anzac Troops had little time to plan their Greek defences. It was not long before the German forces had routed the Allies into a general retreat south to the Island of Crete.
The Nazi forces fought a parachute attack onto Crete. It remains the only Battle in the history of warfare in which a major objective was attacked and captured solely by airborne troops.