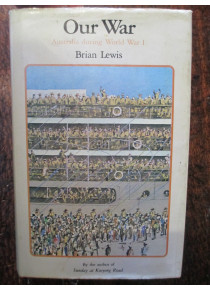 Our War Australia during World War I by B. Lewis

Our War Australia during World War I by B. Lewis﻿

It was commonplace to say that Australia 'came of age' as a nation in World War I.
In this book we see the impact on one family, with 4 brothers, 'somewhere in France'; on the church community as one by one the young men of the congregation enlist; on Wesley College, 'the school at war', and its proud tally of Old Boys killed.

The author, Brian Lewis creates a brilliant kaleidoscope of the war years in Melbourne, using letters, songs and newspapers as well as his own vivid recollections.﻿