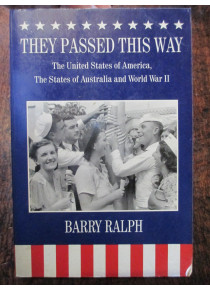 They Passed This Way Story of USA Soldiers in Australia WW2

They Passed This Way the United States of America, and the States of Australia and World War II﻿ By Barry Ralph﻿

During December in 1941 the first of some 1 million American serviceman arrived in Australia. In Australia's 'darkest hour' these troops were Australia's brightest hope. The author tells a story of this Allied invasion from a number of perspectives that combine to throw new light on this dramatic period in Australian history.
The American serviceman needed entertainment and Brisbane Australia was open for business. A broad detailed look at life which existed in Brisbane during these turbulent times culminating in the notorious Battle for Brisbane.﻿
Recollections of times that few people today would believe actually took place.﻿