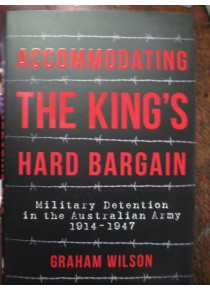 World War I was Australia’s first experience of a mass army and the detention experience was complex, encompassing short and long-term detention, from punishment in the field to incarceration in British and Australian military detention facilities.

The World War II experience was similarly complex, with detention facilities in England, Palestine and Malaya, mainland Australia and New Guinea. Eventually the management of army detention would become the purview of an independent, specialist service.

With the end of the war, the army reconsidered detention and, based on lessons learned, established a single ‘corrective establishment’, its emphasis on rehabilitation.

As Accommodating The King’s Hard Bargain graphically illustrates, the road from colonial experience to today’s triservice corrective establishment was long and rocky. Armies are powerful instruments, but also fragile entities, their capability resting on discipline. It is in pursuit of this war-winning intangible that detention facilities are considered necessary — a necessity that continues in the modern army.