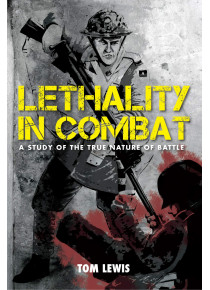 Lethality in Combat - Study of Methods

Kill or Be Killed - the choice in close combat!

Lethality in Combat shines a blazing light on the three most controversial aspects of military combat: the necessity of killing; the taking, or not, of prisoners; and the targeting of civilians.

Author Tom Lewis controversial new book  shatters our preconceptions regarding the rules of engagement and the realities of combat. The truth of warfare is little understood by those who haven’t endured it. It’s romanticised and simplified in many fictional books and movies, and even sanitised in so-called “real” accounts

This book argues that when a nation-state sends its soldiers to fight, the state must accept the full implications of this, uncomfortable as they may be.  Lewis affirms that he ISN’T saying that all such behaviours are ethically correct. However as society members who commission others to carry out violence on our behalf, we should understand these behaviours, and not be too quick to instantly condemn

Drawing on seven conflicts – the Boer War, World Wars I and II, and the wars in Korea, Vietnam, the Falklands and Iraq – the author considers these ethical issues. Lethality in Combat lifts the veil on the much-misunderstood but very real and secret world of unsanitised war.

What Readers are saying... “Makes his case forcefully, showing that warfare is an ongoing part of the human condition, in which seeking maximum effectiveness is the task of the soldier…well worth reading.” (Defence Force Journal)

”The sanitized version of warfare in books and films omits the bloody and ferocious encounters at the sharp end of war, this book explains.” (Review – Newcastle Herald)

“…an impressive book. Your points seem to be accurate and balanced, and your citations are really impressive.” (Ray – Patrick O’Brian online fan club)