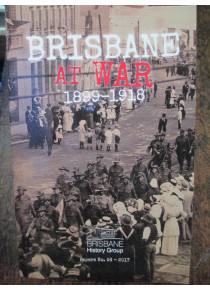 This is a collection of stories about historical Military﻿ aspects of Brisbane during the Boer and WW1.

Written by members of the Brisbane History Group, the chapters offer a diverse range of WW1 subjects.

One story that would be of high interest to World One researchers, Brisbane Grammar old boys and medal collectors. The story explains one of the school's most treasured possessions, the 'Golden Book' which contains the details of the old boys who served in WW1.
In particular, this study concerns twelve of the Brisbane Grammar School old boys who fought both in the Second South African War and World War I.

﻿• the importance of military medicine during the Second South African War

• Brisbane Boy Soldiers, the underage enlistees, their motives, their experiences, their fate and the aftermath

• the opportunities to display patriotism in a range of different performances﻿