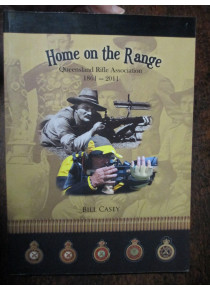 Home on the Range by Bill Casey

Home on the Range by Bill Casey traces the history of one of Queensland’s oldest organisations, the Queensland Rifle Association. Founded in l861 and supported with military funds until 1960, the Association had 18,000 members at its high point in World War One.

Unlike most other clubs, it admitted women as members from 1901. The QRA retains an active membership, maintains some fine rifle ranges and has members prominent in national and international competitions.﻿