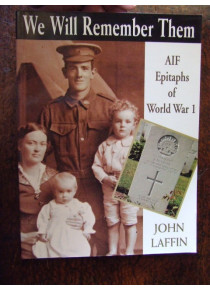 We Will Remember Them AIF Soldier Grave Epitaphs WW1

'We Will Remember Them AIF Epitaphs of World War 1' by John Laffin. Used book

This military Book is the only war book devoted to the epitaphs on
World War One Australian Soldiers graves.

We Will Remember Them' by John Laffin.
I have always liked this book and it is one of my favourites on World War One AIF. This is Mr Laffin's study of AIF epitaphs he has recorded hundreds of them along with many interesting stories researched about the soldier buried. This book gives the reader a solemn reflection of the depth of loss which was caused by this War to the Australian community.
As Mr Laffin states, "Australian epitaphs breathe Australia. There is sunshine and the smell of the bush in Australian inscriptions.
FAR AWAY
FROM THE LAND OF THE WATTLE
HE LIES IN A HERO'S GRAVE
Private W.G.M.Forsyth 3rd Battalion KIA 11/8/1918

A must have for medal research has been name and subject indexed. Now out of print for ten years not likely to be reprinted.

Laffin, a son of two WW1 veterans, was himself a veteran of the Battle of Kokoda. He went on to become one of Australia's most respected military writers. His books have become highly collectable. John Laffin died in 2000.