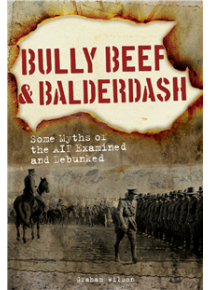 Bully Beef and Balderdash Myths of the AIF

Bully Beef and Balderdash Some Myths of the AIF Examined and Debunked by G. Wilson

Was Beersheba the last great cavalry charge in history? Did the AIF storm the red light district of Cairo and burn it to the ground while fighting running battles with the military police? Was the AIF the only all-volunteer army of World War I? Graham Wilson’s

Bully Beef and Balderdash shines a critical light on these and other well-known myths of the AIF in World War I, arguing that these spectacular legends simply serve to diminish the hard-won reputation of the AIF as a fighting force.

Wilson asserts that the story of the AIF is extraordinary in its own right, its fighting record so well established that there has never been a need to embellish that story. However, as

Bully Beef demonstrates, the history of the AIF has become so shrouded in misinformation that what is now generally accepted as ‘history’ is often little more than myth and legend. Did the men of the Light Horse shoot their horses rather than see them sold off to the hated ‘Gippos’? Was Alfred Gaby VC’s eerie studio portrait actually taken after his death? Did the AIF fight the war on an unrelieved diet of bully beef and biscuits? Wilson painstakingly examines a number of myths associated with the AIF, some cherished and well seasoned others obscure and even whimsical. With meticulous, at times forensic analysis, he sets out to debunk these myths, using a range of first-hand accounts and official records to unravel the facts and set the historical record straight.

Were Catholics in the AIF denied the VC because of their religion? Was Gallipoli an intelligence failure? Graham Wilson mounts his own campaign to rehabilitate the historical reputation of the force free from hyperbole and jingoism to demonstrate that misleading and inaccurate embellishment does nothing but hide the true story of Australia’s World War I fighting army.

Bully Beef and Balderdash deliberately targets some revered legends and, for those who cherish the mythical story of the AIF, this will be uncomfortable but essential reading. Yet, given the extraordinary truth of the AIF’s history, it is certainly compelling reading.