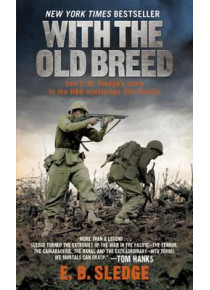 With the Old Breed At Peleliu and Okinawa E.B. Sledge

Eugene Bondurant Sledge (November 4, 1923 – March 3, 2001) was a United States Marine, university professor, and author. His 1981 memoir With the Old Breed: At Peleliu and Okinawa chronicled his combat experiences during World War II and was used as source material for the Ken Burns PBS documentary The War (2007), as well as the HBO miniseries The Pacific (2010), in which he is portrayed by Joseph Mazzello.

"Eugene Sledge became more than a legend with his memoir, With The Old Breed. He became a chronicler, a historian, a storyteller who turns the extremes of the war in the Pacific--the terror, the camaraderie, the banal and the extraordinary--into terms we mortals can grasp."--Tom Hanks