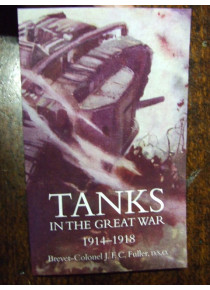 Early 1919 History of the Royal Tanks Corps in World War I covers the development of the tank, mechanical characteristics of early British tanks, particularly the Mark I, as well as the battles at the Somme, Ancre , Arras , Amiens +++. It also describes the growth of the Tank Corps itself, tank tactics, tank engineering plus the tank battles in 1917-1918. There is also appreciation's of German, French and American tank activities. Covers the major Australian battles where tanks were used.﻿
Personal memiors of Colonel Fuller (1878-1966)
Fuller had an important influence on the development of armoured warfare. Fuller was the  senior figure in a group of officers guiding the development of the new British
Tank Service or Tank Corps. As Chief of staff to the Tank Corps from June 1917,
he argued strongly for mass deployment of tanks on suitable ground but saw their
chief function as strategic penetration beyond enemy lines. Fuller gained approval
to try his methods only in late 1917, when his absolute insistence on holding
back reserves was ignored at Cambrai. The mistake prompted Fuller to produce
his famous 'plan 1919 for victory by long range tank attacks with strong air
&amp; artillery support. The brilliant stroke for Fuller was meeting up with
Monash and the Australian Corps for the attack on Hamel . Book has some great printed photo plates of tank action and technical drawings of tanks.﻿