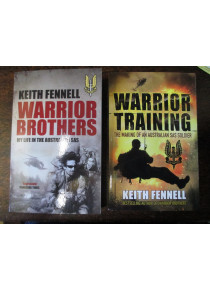 My Life in the Australian SAS

For the first time, an ex-SAS soldier tells all: what it means to be a member of an elite group, the challenges, the highs and the lows - and the sense of duty, honour and brotherhood that never dies.

In 1995, aged just 21, Keith Fennell was accepted into the Australian Special Air Service Regiment, the SAS. Over the next 11 years, operations took him from the jungles of East Timor to the rugged mountains of Afghanistan, from the southern Indian Ocean to Iraq. What he learned about friendship, and about himself, changed him forever.

Fennell's missions forced him to stare death in the face many times. From dodging mines and bullets in Iraq’s Anbar province to assisting the recovery effort after the Asian tsunami, his experiences are shocking and confronting - but also inspiring.﻿

The Making of An Australian SAS Soldier

What makes a warrior? In this action-packed new book, acclaimed SAS soldier Keith Fennell recounts his development as a soldier and as a man, revealing the challenges he overcame in order to perform at the highest level.
The pain is intense; the rewards immeasurable. Fennell takes the reader inside these extreme experiences, all narrated with his trademark honesty and wit. Having survived the immense privation and physical stresses of SAS selection, Fennell served in war zones and humanitarian operations around the world, from a medical deployment in East Africa to facing down Somali pirate ships in the Gulf of Aden.

Yet conquering his addiction to the adrenalised lifestyle of the Regiment in order to become a better husband and father would be his greatest test of all. Thrilling, insightful and inspirational, Warrior Training takes you into the very heart of the Australian SAS.﻿
﻿