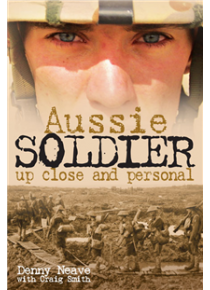 Aussie Soldier Up Close and Personal by by D Neave, C Smith

Aussie Soldier Up Close and Personal by by D Neave, C Smith

Aussie Soldier Up Close and Personal is a fascinating and vivid account of the unique characteristics that shape an Australian soldier.

Author Denny Neave has created an exceptional book featuring the personal anecdotes and experiences of Aussie soldiers from World War One to current conflicts. With the assistance of over 200 Australian soldiers both young and old, Aussie Soldier provides up close and personal perspectives on what being a soldier means to them.

A compilation of confronting, thoughtful and often humorous anecdotes plus excerpts from previously unpublished diaries and interviews,  Aussie Soldier takes us from the battle grounds of Europe, to the jungles of Vietnam and New Guinea, the desert sands of Iraq and Afghanistan as well as peace keeping missions in Rwanda, Timor and Somalia.

‘I wanted to create a book that personalised the Australian soldier and showcased the core values that make them do the things they do.  Aussie Soldier isn’t about the glorification of war or detailing military history, it’s about recognising individuals and what goes through their mind and heart when placed in unimaginable situations. From the mundane to the heroic, it’s the soldiers who are the main players in these events"

Created as fifteen separate chapters, Aussie Soldier includes those focusing on the core values of compassion, mateship, courage, initiative, loyalty, integrity and trust as well as others on close calls in battle and digger’s diaries. In addition, a 30 page battle book provides an accessible snapshot on some of the major conflicts mentioned within the individual stories.

The anecdotes of our Australian soldiers from 87 year old veteran Captain Bede Tong who served during WWII in New Guinea including Kokoda, to Corporal David Hawkins who served in Rwanda, Somali and Timor provide an insight that extends beyond the mainstream perception of the tough Aussie soldier