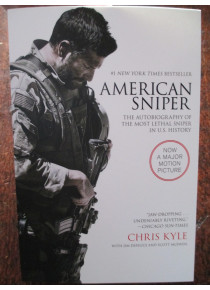 Christopher Scott "Chris" Kyle (April 8, 1974 - February 2, 2013) was a US Navy Seal during the Iraq War.
He is the most lethal sniper in U.S. military history with 160 confirmed kills.
During the Iraq War, Kyle completed 4 tours and was awarded several commendations for acts of heroism and meritorious service in combat.

Kyle left the U.S. Navy in 2009 and then set about writing this book his bestselling autobiography. American Sniper, was first published in January 2012.

Unbelievable tragedy struck when Kyle and a friend Chad Littlefield were both killed while on a rifle range near Chalk Mountain, Texas. They were helping a fellow veteran to overcome post trauma when the psychologically deranged veteran shot both men.

The man accused of killing them is currently on trial for murder. A film adaptation of Kyle's autobiography, directed by Clint Eastwood, was released in December 2014.