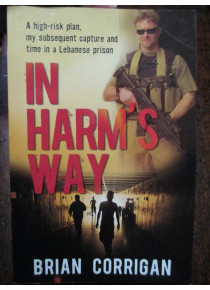 In Harm's Way by B Corrigan

Australian soldier Brian Corrigan, biography and reflections of his service with 3RAR in East Timor during 1999 and 2002. Following, opportunities as a private security contractor during the Iraq War.

In late 2006, Brian Corrigan led a team of ex SAS members into Lebanon to retrieve the two small children of Melissa Hawach. While the children, Cedar, 3 and Hannah, 5, were successfully reunited with their mother, Brian and ather member of his team were detained at the airport and thrown into a Lenanese prison for the next three months.

In Harm's Way is Brian's story of what really happened in Lebanon - their daring rescue mission and subsequent capture - as well as the inside story of life in Roumieh, Beirut's torious maximum security prison, and how Brian used his innate courage, mental discipline and military training to stay focused and alive.