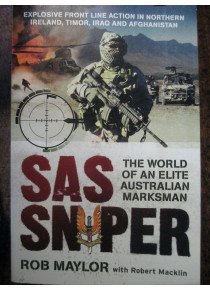 SAS SNIPER covers Rob's two tours of Afghanistan in 2007 and 2008, where he was repeatedly in action and where his comrades were killed and wounded. It was there that he took part in the action that saw his mate Mark Donaldson awarded the Victoria Cross and Rob himself was wounded and won his own medal for gallantry under fire.

As one of Australia's most highly trained and successful combat marksmen, he saw action in East Timor, Iraq and most recently in Afghanistan where he won medals for gallantry in some of the heaviest fighting in the conflict.

He tells of his near-death experience in the Blackhawk helicopter that crashed off Fiji, killing two of his mates. He was also in the personal security detail of the East Timorese President, Xanana Gusmao and the Chief of the Australian Defence Force, Air Chief Marshal Angus Houston.

Rob Maylor tells of his dedication to the dark art of sniping and touches on the history of the great snipers who came before him. It is filled with the rough humour and the almost religious sense of mateship of the SAS regiment.