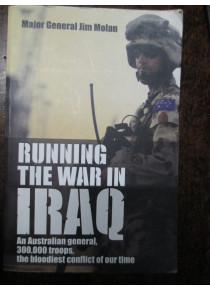 Running The War in Iraq﻿ by Major General Jim Molan

Running The War in Iraq﻿ by Major General Jim Molan

In April 2004, he deployed for a year to Iraq to serve as the Chief of Operations for the new Headquarters Multinational Force in Iraq. He was awarded the Distinguished Service Cross by the Australian Government, and the Legion of Merit by the United States Government.﻿

During this time he was to oversee a force of 300,000 troops, including 155,000 Americans. In Running the War in Iraq he gives a gripping insider's account of what modern warfare entails - the ghastly body count, the complex decisions which will mean life or death, the divide between political masters and foot soldiers - and the small, hard won triumphs.

Recent History of Jim Molan AO DSC but not covered by this book.

In 2008, Jim Molan retired from the Australian Army and released this book during that year. Later the﻿ Australian Government appointed jim Molan as special envoy for Operation Sovereign Borders. He was subsequently credited with being an architect of the coalition's Stop the Boats Australian border protection and asylum-seeker policies.﻿.