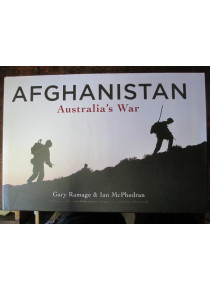 A moving memorial to Australia's longest war and the soldiers who sacrificed all to serve their nation.
The expression a 'picture paints 1000 words' couldn't be more true for each of Gary Ramage's remarkable photographs, every single one of them tells a story. The accompanying text is written by Ian McPhedran - well-known frontline Australian journalist.
The Australian Army / Defense Forces ﻿Mission in Afghanistan has been costly. 49 Australian soldiers have been killed and more than 260 of our soldiers have been wounded. This large book, concludes with an Honour Roll of those who were killed.
﻿