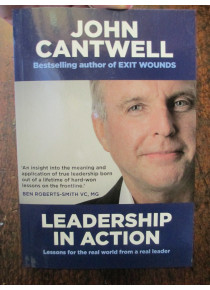 Leadership in Action by John Cantwell

John Cantwell AO DSC retired from the Australian Army early in 2012 after a career lasting almost 40 years. He did not start as an officer but as a private soldier who rose through the ranks to become Major General.

Major General Cantwell served in 3 wars, Operation Desert Storm, the Iraq War and as the Commander of Australian Forces Middle East. He was awarded the Distinguished Service Cross for inspired leadership.

He was made a member of the Order of Australia in 1990 and an Officer of the Order in 2007.
Since his retirement, Major General Cantwell lectures on leadership and military affairs to a variety of defence, business and academic audiences. He was author of the best-selling book Exit Wounds.﻿
He is the patron or ambassador for several organizations that support wounded and emotionally damaged Australian veterans.
Leadership in Action will take you on a leadership journey, offered by man who has led in some of the toughest situations imaginable. Now he reveals all he has learned about leadership during his time in the Australian Army

"Leadership Is Tough. John Cantwell shares his extraordinary experience in a candid and practical way that will be instructive and meaningful for all who aspire to lead."﻿
Dame Quentin Bryce ﻿