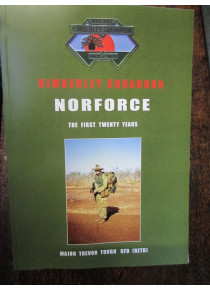 Major Trevor Tough, himself a long time member of the Squadron, has written an informed, detailed and at times passionate account of the Squadron and its people spanning the first 20 years of its establishment in 1981. Characters abound as the author takes us informatively and interestingly through the myriad of specialised skill sets required of a NORFORCE soldier.

And so the book proceeds on a journey describing Trevor's interesting and often hilarious 20 years' service; his anecdotes enlivened with very good and quite unique photographs of men, equipment and an uncompromising hinterland that can only be mastered by true bushmen soldiers.

Major Trevor Tough has done his country, the Army and the communities of northern Australia – in particular the Kimberley – a tremendous service in compiling such an enthralling and comprehensive history of an unique Army unit – Kimberley Squadron NORFORCE.

It is a story of a special breed of soldiers, who display and live the archetypal qualities of the very best type of their kind – professionalism, courage, initiative, humour and personal discipline.

The great joy of this book is that it will bring pleasure to both military and civilian readers alike, whether young or old. It deserves to be widely read and acclaimed and I congratulate its author accordingly."

This is a firsthand account, supported by viewpoints and stories written by Lt Col Neil Weekes MC, a former Commanding Officer of NORFORCE.

It mentions and recognises many of those wonderful Regular Army and Army Reserve soldiers who drove the adventure of Kimberley Squadron along its path to operational readiness. This book will be treasured by all who served in Kimberley Squadron and NORFORCE as well as those who simply enjoy a good yarn about Australians having adventures.