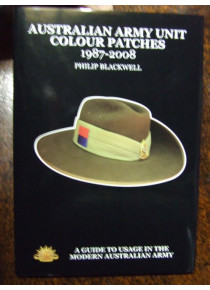 History book Australian Army's system of colour patches arose from the need to id the unit of a soldier in and out of the battlefield field. Patches date back to the first Australian Imperial Force (AIF) in 1914. Although the colour patch was born in the chaos of World War One, and quickly acquired a life of its own as a rallying point, a ready identifier as a soldiers unit. Through the 100 years of Australian Military History, the patch has witnessed stunning victories and more than its fair share of inglorious defeat. Today the colour patch remains the visible symbol of the camaraderie of military service and achieves prominence every Anzac Day as it proudly emblazons the banners carried by returned soldiers and veterans. Discountinued in the 1950's, it was re0introduced into the Australian Army in 1987. This traditionally quintessential military symbol, is again accorded its rightful place within the panoply of Australian military tradition. In the modern Army, the quality of mateship is no less vital then it was to the diggers on the slopes of Gallipoli or in the jungles of Kokoda and the colour patch has agin earned its place as a symbol of mateship.

This definitive guide to Australian Army color patchers acts as a complete ready reckoner, meticulously coded for ease of use. It is both authoritative and accessible, and allows the soldier, veteran and the casual observe to tell at a glance the identity of   each colour patch. Detailed text supported with colour plates of patches and other illustrations.
A prime source for Australian military researcher.