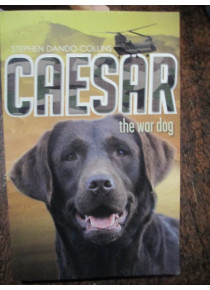 This hero has four paws and a wagging tail! Based on the true stories of heroic military and service dogs who save countless lives. At the kennels, Caesar the chocolate labrador doesn't look special. But Corporal Ben Fulton sees something different - an intelligent dog whose curiosity will make him an excellent sniffer dog in the Australian Army.

On operations in Afghanistan with Ben, Caesar proves his worth, finding hidden explosives and saving the lives of the soldiers. Then, during a Taliban ambush, Caesar is separated from his master. Ben and his best mate Charlie are seriously wounded and evacuated to hospital. But where is Caesar? From their home in Australia, Ben and his family search for clues that might reveal whether their beloved dog is still alive and surviving Afghanistan's bitter winter cold and capture by the Taliban. It will be a long road home, and Caesar will face many hardships along the way, but for this brave and loyal dog, anything is possible.

Caesar the War Dog is based on the true story of Australian military dog Sarbi and its experiences in Afghanistan﻿.